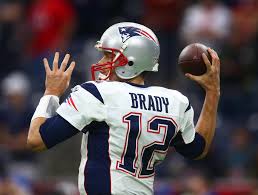 It was 1977 and I was attending my first Buffalo Bills game with my Grandpa Dunn, and as it would turn out it was against the New England Patriots. I do not recall much from this game other then walking into what then was the new Rich Stadium, we were sitting on the sidelines around the 20 yard line, and in warm ups and I remember watching Joe Ferguson throwing passes to his receivers. I do remember my Grandpa telling me “Look at number 32, he will be one of the greatest RB’s to play the game” turned out to be OJ Simpson who did not play in this game but was working out with the team prior to the game. I will never forget watching the Patriots come out the field in their Red jerseys and white pants and the Man on the helmet standing over the ball. It was at this moment, I could have made a choice to be a Patriots fan or a Bills fan….. I had no emotional ties to either team, I was just a kid learning about the sport of football, as my whole world was Hockey back then and the Buffalo Sabres owned my heart!!

The Patriots were led by Steve Grogan #14 and again I don’t remember the game, but I do remember watching the Patriots score a TD in the End Zone in our corner, I remember the Patriots won this game and I may have even cheered for them in this game… My Grandpa was a Bills fan, Jays fan, and a die hard Toronto Maple Leaf’s fan…..I remember him trying to convince me numerous times to start cheering for the Leaf’s instead of the Sabres which was not happening SO there was NO way he was going to lose his grand son to the Patriots!! Therefore I became a fan of the Bills and it made sense as I was already all in with the Buffalo Sabres.

Fast Forward 40 years to 2018 did I make the wrong decision??? Well based on the run the Patriots have been on quite POSSIBLY!!! I love giving the Patriots fans the gears as they love telling the whole world how great they are and how great Tom Brady is….. FYI “I KNOW”!!!!

Patriots fans are very lucky to have experienced 5 Superbowl Championships from 2002 to 2017 and here they are again in the Superbowl to take on the Philadelphia Eagles for a possible 6th Superbowl.

Like every other football fan in the world, other then New England fans, we all sit and hope this is it…..articles are written by National news sources telling us it is coming to an end and we all want to believe its true, I remember when the Bills had their run of 4 Superbowls in a row (And YES I know they lost all Four) fans of other teams would say…. Please don’t let the Bills get there again, even myself I don’t know if I could have watched a 5th loss!!!

This week a good friend of mine Mike Fougere, had a heart attack at the age of 52 and he sent me a picture of himself in bed with a Tom Brady shirt on, he asked me to watch the Facebook video of Tom Brady, so for him, I did. He is a special athlete and I love the work ethic he displayed, and the fact he is still doing this at 40 years old is awesome! Some of you fans have said that I am biased, that I am a hater (This expression drives me crazy….its a Taylor Swift song!!!), and that I am jealous!! That might all be TRUE, but I do recognize greatness and Tom Brady is just that!!!