Here are our CFL Power Rankings following week 13 brought to you by Moose Light and Doyle Corporate Image! 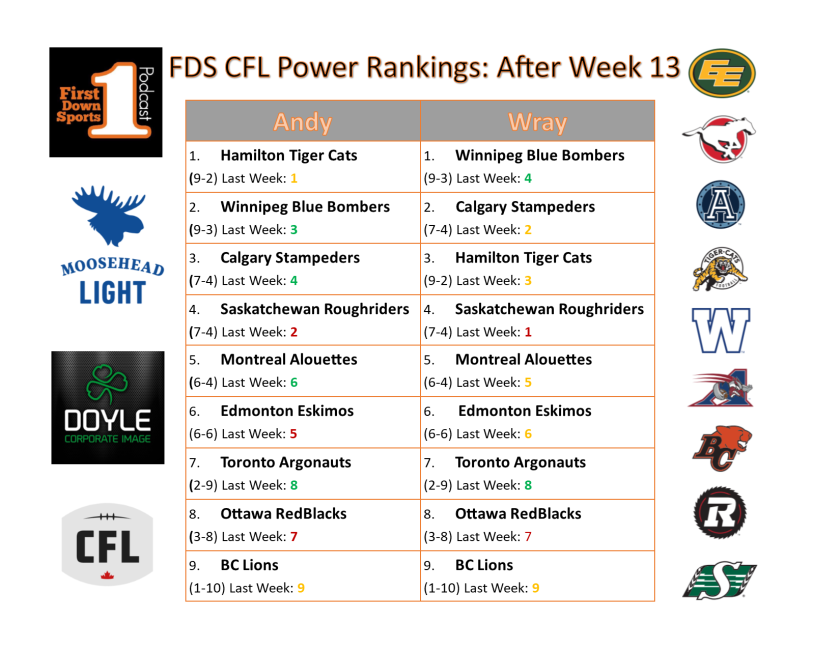 The Roughriders drop from 1st to 4th… How is this possible?

A. Your fans. I heard so much trash talk on Social Media after beating Winnipeg at home with no Nichols and Harris, and then a week later….. Crickets!  Streveler and the Bombers not only took first place back over but they laid a smack down on Riders Nation!
B. Calgary with Bo back are the real deal and Hamilton was on a bye so that leaves Saskatchewan in 4th.

Edmonton drops behind Montreal and there could be changes taking place in Edmonton soon. And finally the Argos get ahead of Ottawa in my rankings with their  big win on the Weekend.

While the big 3 out West play their weekly game of musical chairs, Hamilton remains at the top of the rankings while on their bye. The Ti-Cats have a HUGE week 14 match-up against Bo and his Stampeders, which is a big opportunity for them to prove a lot to the sceptics. Montreal jumps over Edmonton as the Eskimos fizzle more and more, and the Argos pull the same move on the unwatchable Red Blacks. I have nothing to say about the BC Lions that I haven’t already said.