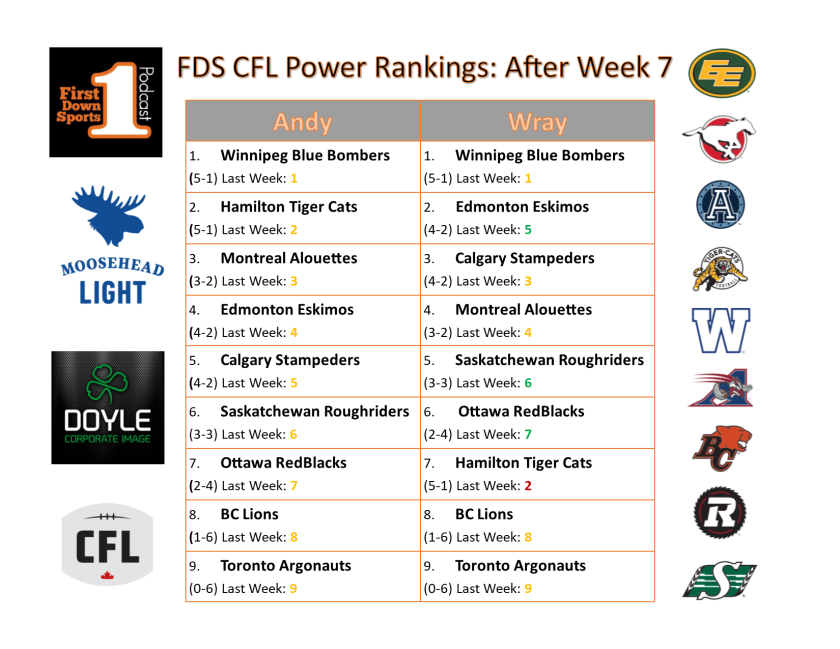 WOW what a weekend for Power Rankings! After Hamilton knocked off Winnipeg they were going to be in my #1 spot, and then the news broke that Masoli is gone for the season… THAT = 7th. Now I know Ti-Cats fans will go through the roof with this, but Evans was not impressive with 13/25 and 94 Yards with an Interception. Trevor Harris bounced back against the Argos as he should have, and moved them back to #2. Montreal stays in the same spot after their bye week although the Eastern Conference may run through Montreal now… CRAZY. BC really deserves 9th place but I just couldn’t pull that trigger this week!!!

Not a single team moves this week in my power rankings. Hamilton would have been in my top spot this week but with the crushing news of Masoli’s season being over, I am simply leaving them at 2. The fact that they pulled that game out against the best team in the league given the circumstances was incredibly impressive, and they deserve a full game and a week of preparing with the kid at QB before reacting too much.  Montreal stays at 3 because though Edmonton, Calgary, and the Riders all won, they beat GARBAGE teams. Yes that includes Ottawa… beating them by 1 with the help of a bonehead coaching call is nothing to write home about Stamps fans.