In November, Randy Ambrosie and the Atlantic Schooners’ ownership group announced live from Saint Mary’s University in Nova Scotia that a season ticket drive would be kicking off immediately. Wray and I were streaming the announcement from his living room while on lunch. I left to return to work before the press conference was finished, but my season ticket deposits were made before I even started my truck.

There was never a question in my mind that if Atlantic Canada finally got a CFL franchise that I would be a season ticket holder and attend every home game. When I asked my friends and work colleagues if they made their deposits yet, I was often greeted with a laugh. The most common response was that they definitely planned to attend some games, but being a season ticket holder was a pretty big commitment knowing the team would be located in Halifax and not here in Moncton.  OK fair… I never even thought about it really, because I knew I was willing to make a big commitment.

Just how big of a commitment would it really be though? It never occurred to me to bother analysing it, until today.

To measure the level of commitment this would require, I am using 3 metrics:

With all that said, here’s the deal: 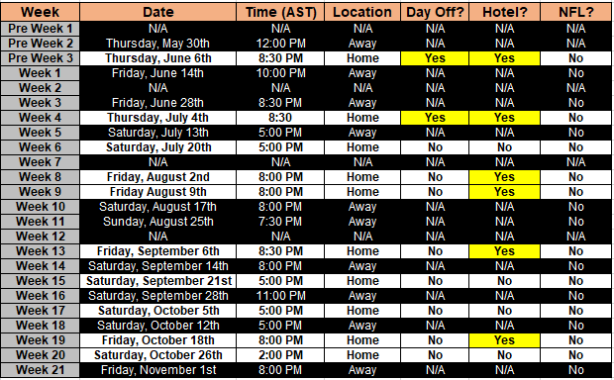 I stated off the top that I was more than willing to make a large commitment to this CFL team. Now that I’ve mapped out the potential impact it could have on my life, I have to say… I’m laughing. For the folks in the rest of the province who would likely need all 6 of those hotel bookings, you may disagree.

Tell me what you think.